In September of 2006, Steve Irwin, fondly known as “The Crocodile Hunter”, died in an encounter with a stingray
Steve Irwin was an expert on animals and spent much of his career working to bring attention to endangered species and aid conservation.   Every day, we are losing some species.  Because of human behavior, many species are extinct.  Steve was the voice for these voiceless creatures. And his amazing videos with different animals drew attention to their plight and changed our perception towards wild species.
Colleen Paige, the Pet Lifestyle Expert, and author founded US National Wildlife Day in Irwin's honor.  Since 2006  September 4th is remembered as a US National Wildlife Day.
If we don’t start taking care of wildlife now, we’re going to lose them. Once an animal has gone extinct, they’re lost forever to future generations, it’s our responsibility not to let that happen. 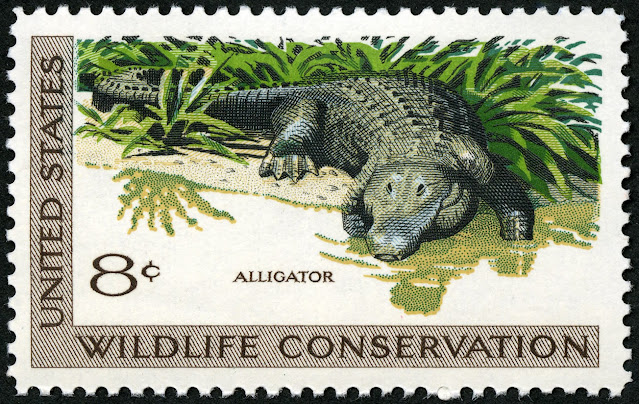 August 12th: US National Vinyl Record Day
Vinyl records are also known as gramophone records and phonograph records. This is an analog sound storage medium in the form of a flat disc with an inscribed, modulated spiral groove.
In the beginning, until about 1960, records were made of shellac, a thicker, more brittle material.  However, polyvinyl chloride became the most popular choice throughout the ‘40s, and this is how the name 'vinyl record' came about, it did not really matter what material was used.
In 2002, Music enthusiast and founder of the first nonprofit organization dedicated to the preservation of the cultural influence of vinyl, Gary Freiberg of California created National Vinyl Record Day. He chose August 12th to commemorate the day because on this day the phonograph was invented by Thomas Edison in 1877. Though back in 1857 itself the phonautograph was patented by Leon Scott, this was not for the intention of playing them back at the time but for visual analysis. Just in 2008 that phonautograms of speech and singing that were made by Scott in the 1860s were played back as sound!
On Vinyl Record Day, Gary encourages everyone to remember the good things in life and to look back on fond memories, especially vinyl records.  Even though the first record was made in the 1800s, records are still being created today!  More vinyl records were sold than CDs in 2020.
On 4th September 2014 Swiss Post issued the below Record Stamp. There is a hole in the center of the round stamp so that it can be placed on the record player to play the brass version of the Swiss National Anthem. 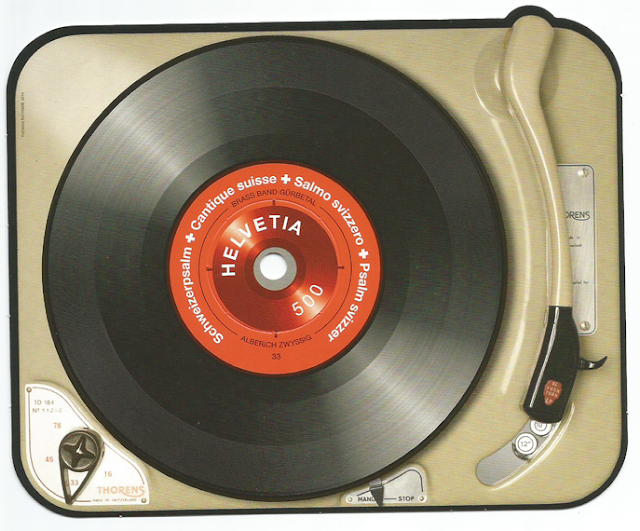 Since the year 2017, the second Wednesday of August is celebrated as World Calligraphy day.  Calligraphy is an art,  where art meets handwriting.  It has been around since ancient times and has had a vast impact on history and culture all around the world.  Different civilizations have different styles inspired by their cultures because it is the combination of visual art with writing.

Today, in the modern world, it is used in many design concepts for advertising and promoting, and it is easy to do because of the advanced technology we have today.

Let the creativity of writing flow through this art.

Below fan-shaped MS was issued by Taiwan Post on 13th January 2016 on the theme Calligraphy and Paintings. 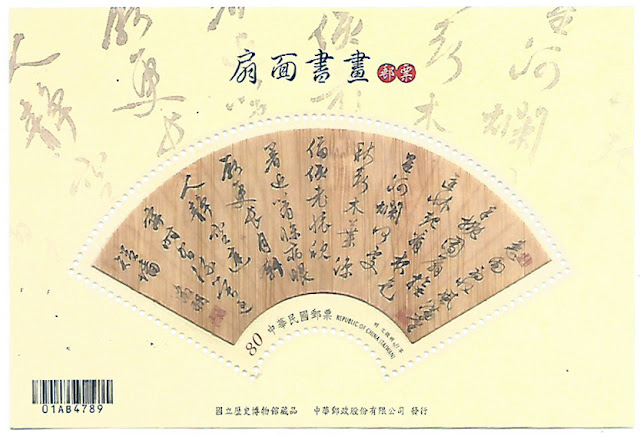 The above Taiwan Miniature sheet depicts a 7 character regulated verse written by Wen Zhengming.  To attract and highlight their culture to the modern generation, these scripts are printed on bamboo strips and the stamp is in the form of a fan.
The 7 characters regulated verse reminds me of our Thirukurral written by Tamil poet Thiruvalluvar.  All 1330 couplets (Kurals) have 7 words, 4 in the first line and 3 in the second line.
Posted by PK at 16:41 No comments:

World Lion Day is celebrated every year on August 10th since 2013.  The King of the jungle, being the largest species on earth, really struggling for its survival.  These majestic cats that symbolise courage, ferocity, and power are threatened by extensive habitat loss. There has been a decline in 80% of the population of lions in the past 100 years.

The King of the jungle actually lives in grasslands and plains.  They were once found throughout Africa, Asia, and Europe.  But their numbers dwindled over the years.  Currently, they just exist in over 25 African countries and 1 Asian country.  The last remaining population of the Asiatic Lions can be found in Gujarat's Gir National Park.  The top member of Asia's Big 5, now only seen in India.

In 2013, National Geographic, Dereck, and Beverly Joubert founded the Big Cat Initiative in 2009 and created World Lion Day in 2013. The majestic species standing as a symbol of many countries and kingdoms, now in the mercy of humans.  Let's protect these wild cats in their natural habitat. 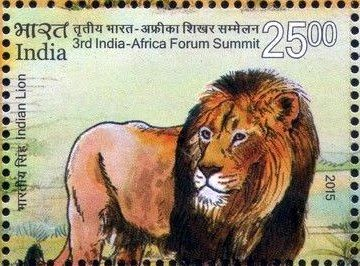 August 6th is Bolivia's Independence Day.  Bolivia came under Spanish colonial rule in the middle of the sixteenth century and was known as Charcas. On May 25th, 1809, the Chuquisaca (modern-day Sucre) Revolution was the first popular uprising in Latin America and is known in Bolivia as 'Primer grito libertario' (the first shout of freedom). This led to the Bolivian War of Independence which lasted for 16 years from 1809 to 1825.  Eventually, the Colonial forces were defeated and Bolivian independence was proclaimed on August 6th, 1825.

To honour the role of the Venezuelan resistance leader Simón Bolívar in leading the fight for independence, Charcas was renamed Bolivia. Interestingly it is said that when deciding what path Charcas should take after independence from Spain, Bolívar favoured a union with Peru and that naming Bolivia after him was a way to get him to accept creating a newly independent country.

Below the Bolivian flag stamp was issued for the 100th National flag anniversary on 5th November 1951. 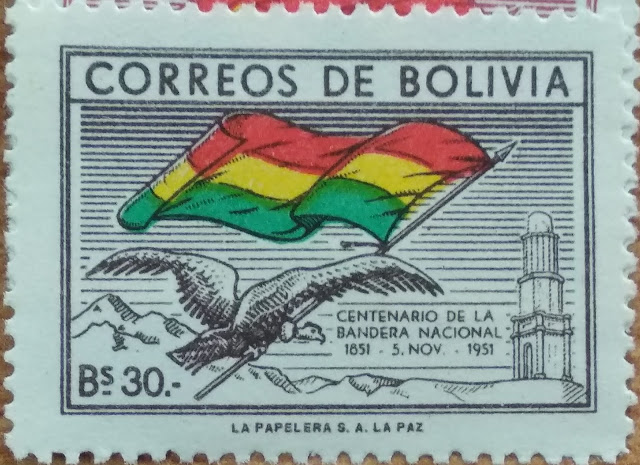 With its inland location within Western Africa, the region did not attract colonial attention until the late nineteenth century. The French army officer Louis-Gustave Binger visited the Morho Naba in 1888. France started obtaining a protectorate over the region from 1895 and by 1898, the kingdoms that now make up the majority of the region corresponding to modern-day Burkina Faso had become a French protectorate.

In 1919, the colony of Upper Volta was established. It was dismantled and reconstituted several times. The present borders were recognized in 1947 when it was becoming an overseas territory of the French Union. On 11 December 1958, The Republic of Upper Volta became a self-governing autonomous republic within the French Community.  Independence was proclaimed on August 5, 1960.

In 1984, Upper Volta was renamed Burkina Faso, which means "Land of Incorruptible People." by Sankara, whose government was responsible for several concrete achievements. 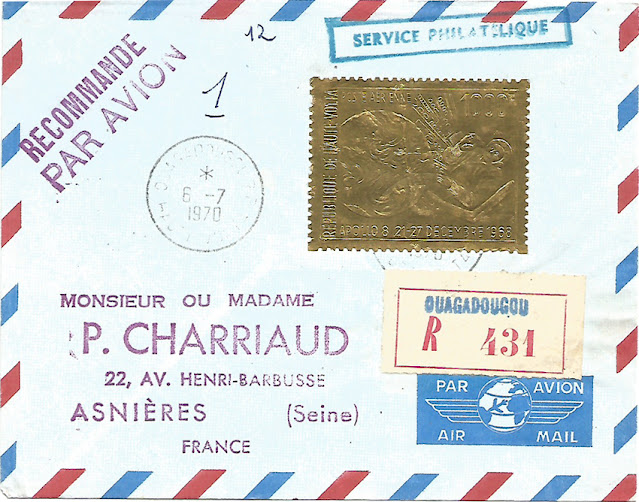 Most of us have heard about "Africa's Big 5" - The elephant, lion, leopard,  buffalo, and rhinoceros. The term big five was first coined by hunters in Africa referring to the most difficult animals to hunt.

And many might know, Asia's big 5 too.  They are Asiatic Lion, Royal Bengal Tiger, Indian Leopard, Clouded Leopard, and Snow Leopard.

Many people in Europe are not aware of the fact that the continent is home to equally impressive.  The term "Europe's Big 5" originated in 2014 in a Belgian television program 'Dieren in nesten' , in which the directors went in search of the European counterparts of the African Big 5.  It was aired between 11th January to 8th February 2014 on Een Belgian Channel.

They were chosen the European bison, the wolf, the brown bear, the wolverine, and the lynx as "European Big 5" after traveling to the wildest and most remote parts of the continent and judged on appearance, importance, rareness, behavior, and emotions they triggered.

You can admire all five of them at the Caves of Han animal park. This animal park celebrated its 50th anniversary in 2017.  To commemorate the 50th anniversary of Hans Cave, Belgium post issued a miniature sheet with Europa's big 5 animal stamps with Bear shape cut at the top. 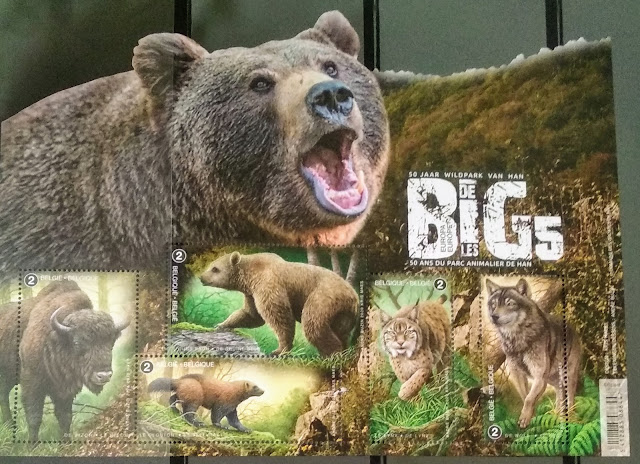