Whale Shark?  We know Whales. They are mammals like humans.  They give birth to young ones and feed them milk. We Know Sharks, they are fish, they lay eggs.  Whales produce sound to communicate, whereas sharks don't have that skill. What is Whale Shark? A whale shark is a shark.  It is the biggest living species of shark on our planet.

We are losing this unique animal because of overhunting for its meat, skin, and bone, colliding with boats, getting trapped in fishing nets, and consuming plastics thrown at sea.

In 2008, during the International Whale Shark Conference held in Isla Holbox,  over 40 whale experts and ocean activists declared August  30th as International Whale Day. In 2012, it got its momentum and since then it is celebrated all around the world.

Below Rhincodon_typus (whale shark) stamp was issued by India Post in 2009. 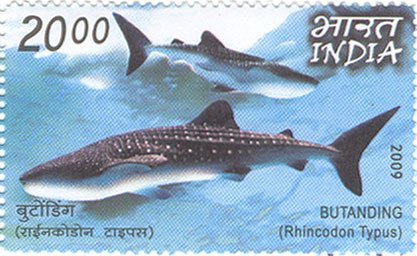