On October 14, 1947, Air Force brigadier general Charles Elwood Yeager set a world record on Bell Aircraft Company's Bell X-1. “Chuck” Yeager became the first pilot to break the sound barrier. Flying the rocket-powered Bell X-1, he achieved Mach 1.06 (Mach is the ratio of the speed of a body to the speed of sound in the surrounding medium).

While coming to stamp issuing policy, many countries, includeing India, USA, the living persons can not appear on a stamp. So, neither Yeager’s name nor his image is part of the stamp design. This was not the first time in USA, that an airplane on a stamp appeared as if no pilot was on board. After Charles Lindbergh flew solo across the Atlantic Ocean in 1927,  USPS issued an airmail stamp depicting the Spirit of St. Louis with no mention or image of Lindbergh.

But Yeager’s wife, Glennis Faye Dickhouse is half lucky as she has her name on the stamp. Yeager had named the Bell X-1 “Glamorous Glennis” in her honor. But because of the error in this stamp design, the plane's name near the nose is misspelled "Glenna" instead of "Glennis".

I am lucky to get this 1997, First super sonic stamps on cover. 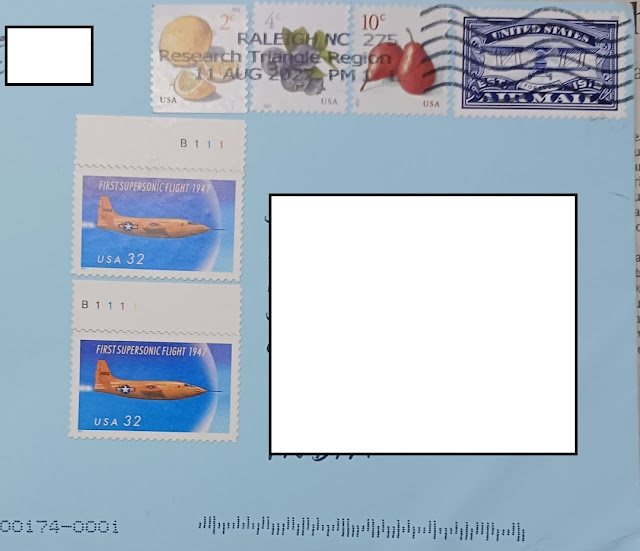 The first supersonic passenger-carrying commercial airplane, the Concorde, was built jointly by aircraft manufacturers in Great Britain and France. It made its first transatlantic crossing on September 26, 1973, and entered regular service in 1976. British Airways and Air France stopped flying the Concorde in 2003.