Belarusian Independence Day is observed on 3rd July since 1996.  The date was chosen through a referendum to honour and pay tribute to the heroism of those who fought to free the capital, Minsk from the Nazis' occupation during the Great Patriotic War (World War II).
Earlier, from 1990 to 1995, they were celebrating Independence Day on the 27th of July, the day they got freedom from the USSR.  But this freedom they got from the fall of the Soviet Union, like many other ex-soviet states.  But for the 1944 freedom Belarus paid a hefty price, a third of the population was killed during the war.  In 1996, Alexander Lukashenko, the country's first President passed a referendum, and the majority of Belarusians voted for 3rd July.  From 1996 to date, they are celebrating independence day on the 3rd of July.
The below hologram stamp was issued by the Belarusian post on 3rh July 2001 for the 10th anniversary of the Republic of Belarus. 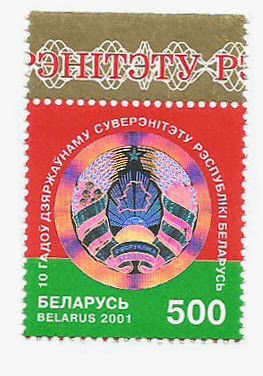 World Camel Day(WCD) has been celebrated on June 22nd every year.  Dr. Raziq Kakar, who has been working with camels for more than 20 years saw the potential of camels and the need to safeguard them.  Since camels can sustain in hottest places and long thirsty days, Razig decided to celebrate World camel day on 21st of June, as it is the longest and hottest day of the year in the northern hemisphere.  But June 21st is already assigned for the World Father's day, he decided to celebrate on June 22nd, which is just 2 seconds shorter than June 21st.

Camels are used in combat, transport, and to provide food.  In those days, without camels, it is hard to travel in the desert.  That's the reason they are fondly known as the ‘Ship of the Desert'.  Scientists found out that camel milk has miraculous powers and high nutritional value.  In fact, the Raikas of Rajasthan, India survived a year-long drought by just drinking camel's milk.  Several studies show that Camel milk has more vitamin C, iron, and calcium than Cow's milk and it showed a positive impact on autism, liver disease, diabetes, jaundice, and even cancer.

From 2009 to 2012 WCD was celebrated in the province of Balochistan. Slowly and gradually, it earned support at the global level. And from 2014, it has been celebrated every year all around the world.

Below stamp was issued by Lebanon post in the year 1968 under the theme, domestic animals. 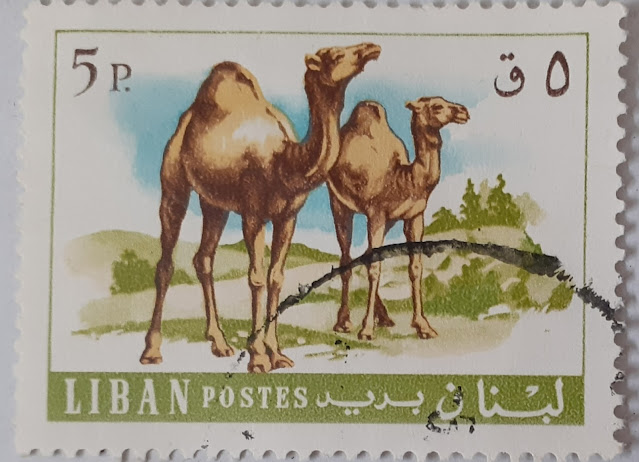 The longest day is for the tallest animal on the earth.  June 21st is the longest day of the year in the Northern hemisphere. The Giraffe Conservation Foundation (GCF) the only NGO in the world that concentrates solely on the conservation and management of giraffes in the wild throughout Africa decided to celebrate June 21st as World Giraffe Day to promote awareness to save Giraffes.  It was first celebrated in the year 2014.

The friendly, active (they sleep for just 2 hours a day), inspirational and unique animal is found at just around 100,000 in the wild.  In the IUCN Red List of Threatened Species, giraffes have recently had their listed status changed to Vulnerable to extinction.  Giraffes are officially extinct in more than seven African countries.

It's all because of human greediness.  On one side, they have been hunted for medicinal use and to make fashion products.  Another side, their habitat was reduced by 90% because of encroachments.  It would be a tragedy if giraffes were to go extinct in the wild.

There are four separate species of giraffe in the world. The Masai giraffe lives on the border between Kenya and Tanzania, the reticulated giraffe and the southern giraffe live in countries like Botswana, and the northern giraffe, dominates much of the north of Africa.

If you want to donate, please visit the below link. Please check for authenticity before donating.

When I was digging into my stamp file, I got only one Giraffe stamp.  The below stamp was issued by Poland in the year 1972. 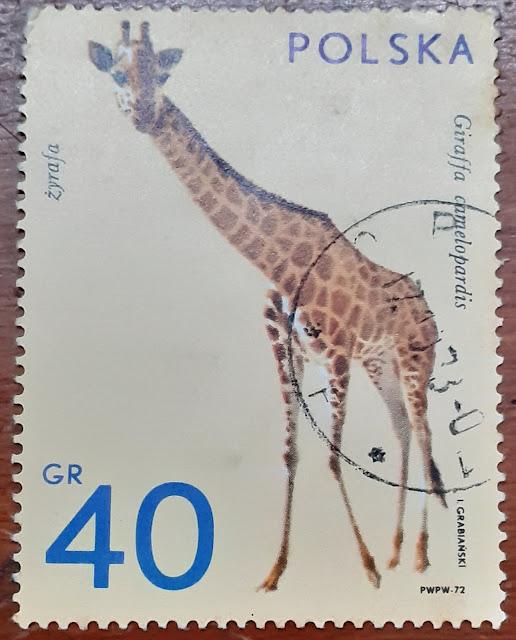 World's Oldest Post Office
The world's oldest post office is celebrating its 310th birthday in 2022.  The Sanquhar post office in Dumfriesshire began its journey in 1712.  Since then it has been operational till now, in spite of a lot of struggles.
It turned 300 in 2012.  To celebrate this iconic mile stone this post office received a legend postmark, "Worlds Oldest Post Office" on request of people from around the world.  It received recognition from both the Universal Postal Union (UPU) and the Guinness Book of World Records.
When the post office was opened, the postmen, who were called “runners,” ran between offices to deliver letters and parcels.  In 1738, the post office began stamping mails and later introduced horses which were used to deliver letters and parcels. It was modernized in 1974 with the hand-operated canceling machine called bacon slicer.  Unfortunately, the historic post office was put for sale in 2014 due to the persistent losses and the uncertainty of the business.  The post office was almost closed down when it was apparent that a buyer could not be found. However, it reopened its doors in 2015 under a new postmaster after its renovation and refurbishment.  Again it went on for sale in 2019 as the postmaster decided to retire.  Luckily it is continuing its business till today.
I got the world record stamping on a picture postcard, through my friend Beth.  Thanks a lot, Beth. 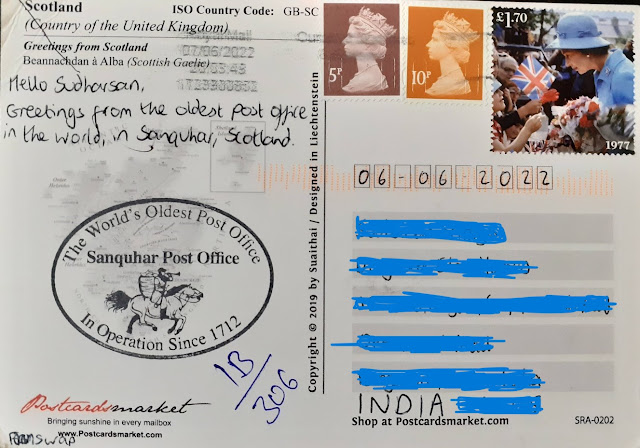 The closest rival to the Sanquhar Post office, which is 8 years younger than Sanquhar, can be found in Stockholm, Sweden, which was founded in 1720. The third oldest is found in Santiago, Chile, and was established in 1772.  I am looking for cancellations from these post offices and would be grateful if someone could help.
Posted by PK at 22:03 No comments:

World Blood Donor Day
Karl Landsteiner, the Austria - Hungarian has been described as the father of transfusion medicine. Landsteiner made numerous contributions to pathological anatomy, histology and immunology.  In 1909, he classified the bloods of human beings into the now well-known A, B, AB, and O groups and showed that transfusions between individuals of same groups A or B do not result in the destruction of new blood cells.   This great invention not only fetched him Nobel Prize in 1930, but also saving millions of lives today.
For transfusion we need blood.  90% of blood are received from volunteer donors for free.  To commemorate the donors and encourage others to donate, World Health Organization (WHO) and the International Federation of Red Cross and Red Crescent Societies (IFRC) , decided to celebrate World Blood Donor Day on 14th June since 2005, Which is the birth day of Karl Landsteiner.
World Blood Donor Day is one of 11 official global public health campaigns marked by the WHO.  The global theme of World Blood Donor Day changes each year.
Today the whole world celebrates this day in recognition of the selfless individuals who donate their blood for people unknown to them.  If you haven't done this yet, today is the day to do the noble thing.  Blood donation is next to Godliness as you are saving a unknown person without any expectation.
Below stamp set issued by Papua New Guinea in the year 1980 to commemorate Red Cross Blood Bank. No childhood could have passed without dolls.  Dolls give a child complete happiness and knowledge.  Though we had a number of dolls when we were young, only a few remain in our minds forever.  The one which is part and parcel of everyone's childhood should deserve a day right?  Yes, we do have a World Doll Day.  It is celebrated every year on the second Saturday in June since 1986.

There is an interesting story of how posts/chain letters played a role in commemorating a day for dolls.  Mildred Seeley, an avid doll collector, and doll-related entrepreneur thought of having a special day for the dolls.  She started sending out letters asking people to participate in the doll day and requested each person who have received the letter to spread the word to 5 more people.  This spread like a wildfire and the very first world doll day was celebrated on June 14, 1986.

Can you believe that dolls have been around since 2000BC?  Archeologists found the oldest dolls in Egyptian tombs.  Thereafter dolls have been made from several materials like wood, clay, porcelain, leather, cloth, metals, plastics, nuts, and even bones. Inuit make dolls from soapstone and bone, dressed in fur.

In India, we have an International Doll Museum in New Delhi, our capital city. Celebrated political cartoonist, K. Shankar Pillai received a doll as a gift from the Hungarian ambassador.  Since then, he became passionate about collecting dolls. This museum was founded by him in 1965, with over 6500 dolls from over 85 countries.

What is your favorite doll?  It's time to cherish them.

The below stamp is issued by India Post in the year 2010. 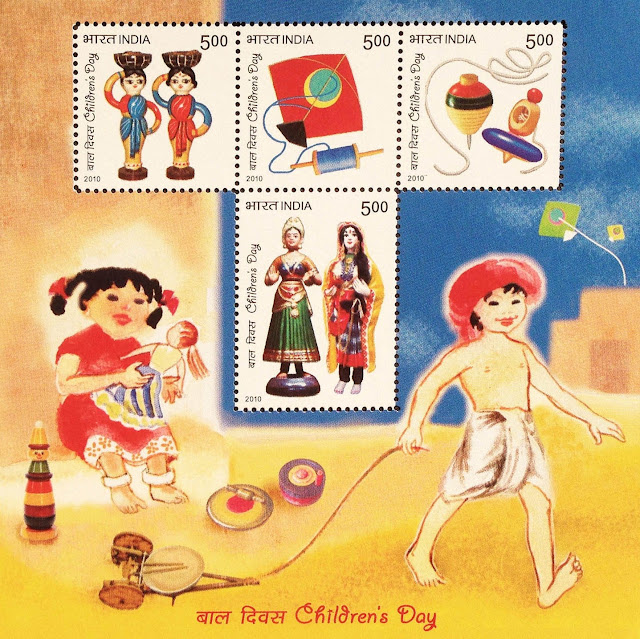